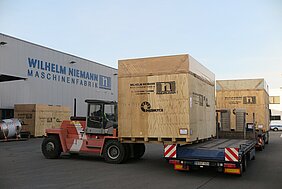 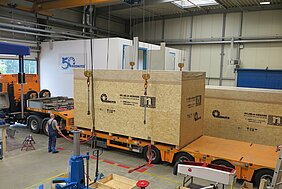 Several special vehicles for large loads arrived at NIEMANN. They will be loaded with large dissolvers of the type ADV (top-mounted dissolver) and ADV-TS (triple shaft).

The machines belong to the large order of the Jotun group, which we received last summer. The well-respected paint and coating producer will equip two new factories, one in Egypt and one in Vietnam, with a total of 36 machines from our company.

In Vietnam, Jotun plans to produce in the new factory per year up to 85 million litres water-based paints and 10.000 tons powder coatings from summer 2021 on.

The new factory in Egypt will be one of the largest in the Middle East. With a production capacity of more than 80 million litres per year it will produce more than twice as much as in the existing Jotun factory.