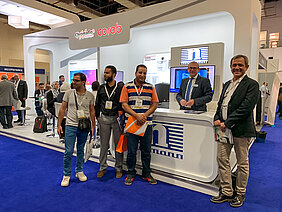 From September 23 to September 24, 2019 company NIEMANN participated as exhibitor at the Egyptian Coatings Show. The exhibition that was until recently known as Middle East Coatings Show, took place in its twelveth edition, under new name for the first time now. Despite the tense political situation, the exhibition has well established in the past years. Meanwhile it has grown up to one of the biggest trading platforms for the coatings industry in Middle East.

Of course, also company NIEMANN took the opportunity to present the latest product innovations and was extensively networking with former as well as new acquaintances.